There is a problem in the tech community called “Devsplaining“. This notion is used to describe when “experts” condescendingly explain to others the “proper way to code”.

The thing is that there is really is no proper way to code. Usually, the “experts” unnecessarily complicate stuff. As a result, most beginners think they need to study coding for years and know everything about the latest technology before they are capable of contributing anything valuable. With this kind of mindset, most never share anything they create. In tech, this means that people never launch their project or never even start because they think they aren’t ready.

Exactly the same problem exists in physics, mathematics and probably most other scientific fields. The problem is so widespread that there isn’t even a name for it. It’s just so normal.

As a result, many people feel they are not good enough to contribute. This is a problem because people who overcomplicate things exclude many brilliant minds who really could make a difference.

Possibly from a rigorous proof.

Possibly from a long and complicated calculation.

Possibly from a simple thought experiment.

It’s not too hard to find examples for each of them:

Moreover, making huge discoveries is not the only possibility to help physics move forward. To quote Sir William Lawrence Bragg

There is a famous cartoon (based on a quote, often attributed to Einstein) that summarizes the problem nicely: 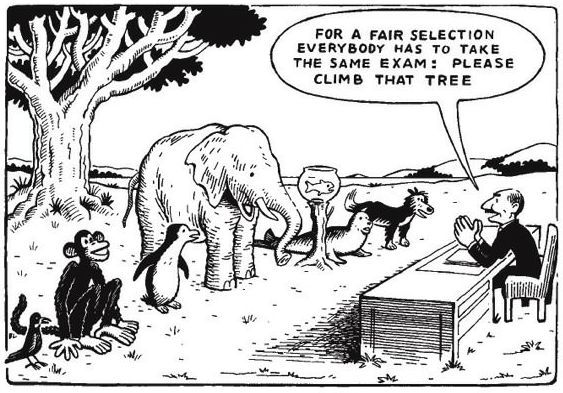 If you now roll your eyes because you have seen this cartoon already 100 times, please let me explain.

The thing is that while in exams the task usually is comparable to the task “climb the tree” here, the overall “task”, for example, in physics is much broader. Maybe more like “understand the tree”. Climbing the tree is a viable possibility to understand some aspects of the tree, but certainly not exhaustive.

The thing is that “Devsplainers” try to convince everyone that the only thing worth doing is to climb the tree and that you have to do it in a very specific way.

However, with a broader goal like “understand the tree” in mind it’s easy to imagine how each of the animals in the cartoon could contribute.

The fish and bird could together figure out where the water comes from that are crucial for the tree. The elephant could use his strength to open up a “window” to look inside… You get the idea.

As an aside: From this perspective, it’s clear how problematic it is that students usually are only asked to “climb the tree” in exams. Many students who could contribute in other ways are filtered out. However, this is a quite different story I don’t want to dive into here.

So how could the situation be improved?

I have two concrete ideas.