“Further progress lies in the direction of making our equations invariant under wider and still wider transformations.”

These prophetic lines were written in 1930 by P. A. M. Dirac in his famous book “The Principles of Quantum Mechanics”. In the following centuries, tremendous progress was made exactly as he predicted.

Weak interactions were described perfectly using $SU(2)$ symmetry, strong interactions using $SU(3)$ symmetry and it is well known that electrodynamics can be derived from $U(1)$ symmetry. Other aspects of elementary particles, like their spin, can be understood using the symmetry of special relativity.

By making our equations invariant under the quite large set of transformations:

we are able to describe all known interactions of elementary particles, except for gravity. This symmetry is the core of the standard model of modern physics, which is approximately 40 years old. Since then it has been confirmed many times, for example, through the discovery of the Higgs boson. Just as Dirac predicted, we gained incredible insights into the inner workings of nature, by making the symmetry of our equations larger and larger.

Unfortunately, since the completion of the standard model $\sim 40$ years ago, there was no further progress in this direction. No further symmetry of nature was revealed by experiments. (At least that’s the standard view, but I don’t think it’s true. More on that later). In 2017 our equations are still simply invariant under $ \text{Poincare Group} \times U(1) \times SU(2) \times SU(3) , $ but no larger symmetry.

I’m a big believer in Dirac’s mantra. Despite the lack of new experimental insights, I do think there are many great ideas for how symmetries could guide us towards the correct theory beyond the standard model.

Before we can discuss some of these ideas, there is one additional thing that should be noted. Although the four groups $ \text{Poincare Group} \times U(1) \times SU(2) \times SU(3) $ are written equally next to each other, they aren’t treated equally in the standard model. The Poincare group is a spacetime symmetry, whereas all other groups describe inner symmetries of quantum fields. Therefore, we must divide the quest for a larger symmetry into two parts. On the one hand, we can enlarge the spacetime symmetry and on the other hand, we can enlarge the inner symmetry. In addition to these two approaches, we can also try to treat the symmetries equally and enlarge them at the same time.

Let’s start with the spacetime symmetry.

Enlargement of the Spacetime Symmetry

Before Einstein discovered special relativity, people used a spacetime symmetry that is called the Galilean group. The Galilean group also describes transformations between inertial frames of reference but does not care about the speed of light.

It is natural to wonder if the Poincare group is an approximate symmetry, too.

The answer she found was stunningly simple: “the only groups which can be contracted in the Poincaré group are $SO(4, 1)$ and $SO(3, 2)$”. These groups are called the de Sitter and the anti-de Sitter group.

Levy‐Nahas’ discovery is great news. There isn’t some large pool of symmetries that we can choose from, but only two. In addition, the groups she found are simple groups and therefore much “prettier” than the Poincare group.

Following Dirac’s mantra and remembering the fact that the deformation: Galilean Group $\to $ Poincare Group led to incredible progress, we should take the idea of replacing the Poincare group with the de Sitter or anti de Sitter group seriously. This point was already emphasized in 1972 by Freeman J. Dyson in his famous talk “Missed opportunities”.

To answer these questions, we must first answer the question: what is the energy scale that is left invariant?

The answer is: it’s the cosmological constant!

The present experimental status is that the cosmological constant is tiny but nonzero and positive: $\Lambda \approx 10^{-12}$ eV! This smallness explains why the Poincare group works so well. Nevertheless, the correct spacetime symmetry group is the de Sitter group. I’m a bit confused why this isn’t mentioned in the textbooks or lectures. If you have an idea, please let me know!

Can we enlarge the spacetime symmetry even further?

Yes, we can. But as we know from Levy‐Nahas’ paper, only a different kind of symmetry enlargement is possible. There isn’t any other symmetry that could be more exact and yield the de Sitter group in some limit. Instead, we can think about the question, if there could be a larger broken spacetime symmetry.

Enlargement of the Inner Symmetry

The inner symmetry group of the standard model $ U(1) \times SU(2) \times SU(3) $ is quite ugly, too. Like the Poincare group, it is not a simple group.

There is an old idea by Howard Georgi and Sheldon Glashow that instead of $ U(1) \times SU(2) \times SU(3) $ we use a larger, simple group $G_{GUT} $. These kinds of theories are called Grand Unified Theories (GUTs).

While GUTs have problems, they are certainly beautiful. On obvious “problem” is that in present-day colliders, we do not observe effects of a $G_{GUT}$ structure and thus we assume the unified gauge symmetry is broken at some high energy scale:

where the dots indicate possible intermediate scales between $G_{GUT}$ and $G_{SM}$. In the following, we discuss some of the “mysteries” of the standard model that can be resolved by a GUT.

In the standard model the electric charges of the various particles must be put in by hand and there is no reason why there should be any relation between the electron and proton charge. However from experiments it is known that $Q_{\text{proton}}+Q_{\text{electron}}= \mathcal{O}(10^{-20})$. In GUTs one multiplet of $G_{GUT}$ contains quarks and leptons. This way, GUTs provide an elegant explanation for the experimental fact of charge quantization. For example in $SU(5)$ GUTs the conjugate $5$-dimensional representation contains the down quark and the lepton doublet

The standard model contains three gauge couplings, which are very different in strength. Again, this is not a real problem of the standard model, because we can simply put these values in by hand. However, GUTs provide a beautiful explanation for this difference in strength. A simple group $G_{GUT}$ implies that we have only one gauge coupling as long as $G_{GUT}$ is unbroken. The gauge symmetry $G_{GUT}$ is broken at some high energy scale in the early universe. Afterward, we have three distinct gauge couplings with approximately equal strength. The gauge couplings are not constant but depend on the energy scale. This is described by the renormalization group equations (RGEs). The RGEs for a gauge coupling depends on the number of particles that carry the corresponding charge. Gauge bosons have the effect that a given gauge coupling becomes stronger at lower energies and fermions have the opposite effect. The adjoint of $SU(3)$ is $8$-dimensional and therefore we have $8$ corresponding gauge bosons. In contrast, the adjoint of $SU(2)$ is $3$-dimensional and thus we have $3$ gauge bosons. For $U(1)$ there is only one gauge boson. As a result for $SU(3)$ the gauge boson effect dominates and the corresponding gauge coupling becomes stronger at lower energies. For $SU(2)$ the fermion and boson effect almost cancel each other and thus the corresponding gauge coupling is approximately constant. For $U(1)$ the fermions dominate and the $U(1)$ gauge coupling becomes much weaker at low energies. This is shown schematically in the figure below. This way GUTs provide an explanation why strong interactions are strong and weak interactions are weak. 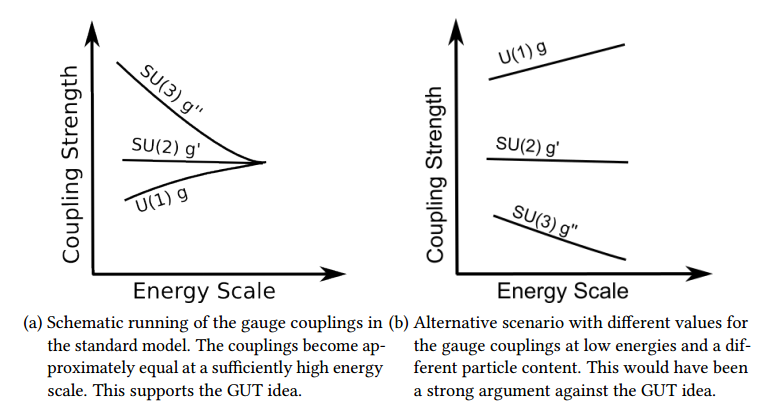 In addition to the “classical” GUT postdictions described in the last two sections, I want to mention two additional postdictions:

While the unification of spacetime symmetries was already confirmed by the measurement of the cosmological constant, so far, there is no experimental evidence for the correctness of the GUT idea. Thus the unification of internal symmetries still has to wait. However, proton decay could be detected anytime soon. When Hyper-Kamiokande will start operating the limits on proton lifetime will become one order of magnitude better and this means there is a realistic chance that we finally find evidence for Grand Unification.

This, however, would by no means be the end of the road.

Arguably, it would be awesome if we could unify spacetime and internal symmetries into one large symmetry. However, there is one no-go theorem that blocked progress in this direction: the famous Coleman-Mandula theorem.

Nevertheless, a no-go theorem in physics never really means that something is impossible, only that it isn’t as trivial as one might think. There are several loopholes in the theorem, that potentially allow the unification of spacetime and internal symmetries.

At least to m, it seems as Dirac was right and larger symmetries is the way to go. However, so far, we don’t know which way we should follow.