Group theory is the mathematical tool one uses in order to work with symmetries. Because symmetries are defined as invariance under transformations, one defines a group as a collection of transformations. Let’s get started with two easy examples to get a feel for what we want to do: 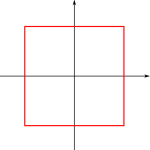 1) A square is mathematically a set of points (for example, the four corner points are part of this set) and a symmetry of the square is a transformation that maps this set of points into itself.

This becomes obvious if we focus on the corner points of the square. Transforming the set by a clockwise rotation by, say 5°, maps these points into points outside th 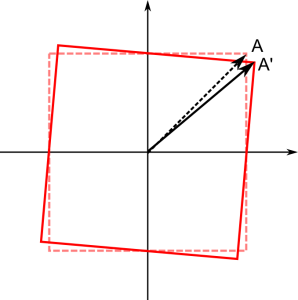 e original set that defines
the square. For instance, the corner point $A$ is mapped to the point $A’$, which is not found inside the set, that defined the square in the first place. Therefore a rotation by 5° is not a symmetry of the square. Of course, the rotated object is still a square, but not the same square (read: set of points). Nevertheless, a clockwise rotation by 90° is a symmetry of the square because the point $A$ is mapped to the point $B$, which lies again in the original set. Other examples of symmetry transformations of the square would be rotations by 180°, 270° and of course 0°. 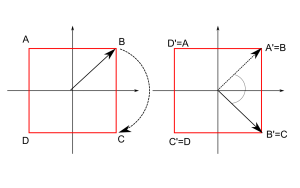 Another perspective: Imagine you close your eyes for a moment, and then someone transforms the square in front of you. If you can’t tell after opening your eyes again if the other person changed anything at all, the transformation the person performed was a symmetry transformation.

The unit circle is invariant under all rotations about the origin, not just a few. In other words: the transformation parameter (the rotation angle) can take on arbitrary values, and the group is said to be a continuous group.

Of course, mathematics isn’t exclusively about geometric shapes and one can find symmetries of different kinds of objects, too. For instance, considering vectors, one can look at the set of transformations that leave the length of any vector unchanged. (The object that is unchanged in this case is the metric, which is the mathematical object that defines length.) For this reason, the definition of symmetry I gave at the beginning was very general: Symmetry means invariance under a transformation. Luckily, there is one mathematical tool, called group theory, that lets us work with all kinds of symmetries. (As a side note: group theory was invented historically to investigate symmetries of equations).

We are now able to see that the abstract definition of a group simply states (obvious) properties of symmetry transformations:

A group is a set $G$, together with a binary operation $\circ$ defined on $G$ that satisfies the following axioms