As an aside: Group theory is the branch of mathematics one uses to work with symmetries. If you don’t know already what group theory is all about, have a look at my my post about it.

Next, take a look at the symmetry transformations of a circle. Certainly, a rotation by 0,000001° is a symmetry of the circle. One says, the symmetry group of a circle is continuous, because the rotation parameter (the rotation angle) can take on arbitrary (continuous) values. Mathematically, with the identity denoted $I$, an element $g$ close to the identity is denoted \begin{equation} g(\epsilon)=I+ \epsilon X \end{equation} where the $\epsilon$ is, as always in mathematics, some really, really small number and $X$ is an object, called generator, we will talk about in a moment.

The idea behind such lines of thought is, that one can learn a lot about a group by looking at the important part of the infinitesimal elements (denoted $X$ above): the generators.

In the following posts, using the language of differential geometry, the reason for why this is possible and how it makes things much easier, will be explained in great detail.

For matrix Lie groups one defines the Lie algebra corresponding to the Lie group as the collection of objects that give an element of the group when exponentiated. (This is an easy definition one can use when restricting to matrix Lie groups. Later we will introduce a more general definition.)

We learn from the Baker-Campbell-Hausdorff-Formula that the natural product of the Lie algebra is , not as one would naivly think, ordinary matrix multiplication, but the Lie bracket $[,]$. One says, the Lie algebra is closed under the Lie bracket, just as the group is closed under the corresponding composition rule $\circ$, e.q. matrix multiplication.

The abstract definiton of a Lie algebra will use the Lie bracket as the defining object. A Lie algebra is defined by its Lie bracket. As always, things become much easier when we look at some examples.

Example: Rotations in three dimensions and the group SO(3)

We start with rotations in three dimensions. The defining feature of a rotation is that it leaves the length of any vector unchanged. The length of a vector in three-dimensions is given by the standard scalar-product of the vector with itself

where the upper $T$ denotes transposing. We exchanged the scalar product $\cdot$ by ordinary matrix (a three dimensional vector is then just a (1,3) matrix) multiplication, which requires that we transpose (exchanging columns and lines of a matrix) the vector to the left, to get the same result that we get using the rules of the scalar product. In what ways can we transform the arbitrary vector $\vec v $ such that its length remains unchanged? We denote the transformation by a matrix $O$ and therefore $v’=O \vec v$. The length of this transformed vector is

and therefore $O^T O =1$ must hold. This is defining condition of a matrix Lie group, called $O(3)$, where the $O$ stands for orthogonal and $3$ for 3 dimensions.

Therefore, all $3\times3$ matrices fulfilling the two condition $O^T O =1$ and $\det(O)=1$ describe rotations in three dimensions. These two conditions define a matrix Lie group called $SO(3)$, where $O$ stands for orthogonal ($O^T O =1$) and $S$ for special ($\det(O)=1$ ). A basis for this group are the usual rotation matrices in three dimensions. (You can check that these matrices fulfil the defining conditions and that they are linearly independent.)

Lie algebra of SO(3)

We can now derive the Lie algebras of $SO(3)$. The definition given in the last section for the Lie algebra was that its the set of matrices that gives elements of the group by exponentiation.

The defining conditions for the $SO(3)$ group are

where we get a finite transformation as usual by exponentiating. Putting this into the first defining condition we get

These are the generators of the $SO(3)$ group! We can compute the Lie-Bracket of these generators by brute-force computation, which yields

where $\epsilon_{ijk}$ is the Levi-Civita symbol.

Lets see what finite transformation matrix we get from the first generator. We can focus on the lower right 2×2 matrix $j_1$ and ignore the zeroes for a moment.

We can immediately compute

And therefore the complete finite transformation matrix is

which we can recognize as the well-known rotation matrices in 3-dimensions.

The group $SU(2)$ and its Lie algebra

Next we look at a Lie group, called $SU(2)$, which has a close connection to rotations in three dimensions, too. Unfortunately, exploring this connection takes some time and in this post I want to focus on a different aspect. I will treat here $SU(2)$ as an abstract group defined by the conditions

and describe the connectionbetween $SU(2)$ and rotations in a different post. At this point you have to believe me that $SU(2)$ is incredibly important in physics and therefore worth a look.

If we next want to derive the Lie algebra of $SU(2)$, we start again with the defining conditions of the group. If we write them in terms of the generators we get

Using this basis we are able to derive the Lie Bracket. Computing yields

where $\epsilon_{ijk}$ is again the Levi-Civita symbol. To get rid of the nasty $2$ its conventional to define the generators of $SU(2)$ as $J_i= \frac{1}{2} \sigma_i$. Therefore the Lie algebra reads

We learn:
There is one Lie algebra to each Lie group, but there can be many groups having the same Lie algebra. Therefore, the reverse identification (Lie algebra $\rightarrow$ Lie group) is, in general, not possible.

This can be quite confusing and I want to state one advanced result at this point: There is precisely one distinguished Lie group for each Lie algebra. This group is distinguished because it has the property of beeing simply connected. (This notion will become clear in the following posts, when we look at Lie group theory from the differential geometrical point of view.)

To emphasize this important point:

There is precisly one distinguished (simply connected) Lie group corresponding to each Lie algebra. 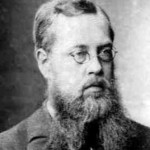 As a sidenote:
Nature agrees with such lines of thought! To describe the elementary particles one uses the representations of the covering group of the Poincare algebra (the Lie algebra belonging to the Lie group of special relativity, called Poincare group), instead of just naive group one derives the Poincare algebra from. To describe nature at the most fundamental level one must use the mother group instead of any of the other groups one can map to from the mother group.

The point of view (the “naive perspective”) described in this post is, in fact, how the inventor of the theory, Sophus Lie, looked at the theory, now named after him: Infinitesimal elements generating the groups of continuous transformations.

In the next posts we will take a look at a more sophisticated approach to Lie theory, that helps understanding many important features of Lie’s theory from a new angle.